Get 6 FREE Moving Quotes for Shipping to JORDAN

Moving to Jordan from Dubai in 2021 takes careful preparation and attention to details and documentation. We provide everything you need to know before moving from Dubai to Jordan. Start your move today by obtaining up to 6 competitive moving to Jordan quotations FREE.

The ancient country of Jordan is located at the intersection of three continents, Asia, Europe, and Africa. At just under 90,000 square km, Jordan borders Syria to the north, Saudi Arabia to the south, Iraq to the northeast and Palestine and Israel to the west. The country is landlocked barring the 26 km Red Sea coastline known as the Gulf of Aqaba.

The name Jordan comes from the river of Jordan, and its name first appeared in history as far back as 1,000 years BC. Since then the country was ruled by several kingdoms and empires including the Nabataeans, Romans, and Ottomans. Following World War 2, Jordan became an independent state in 1946.

Most cities, including the capital, Amman, are located in the north-west of the country which is less arid and experiences more rainfall leading to more fertile land.

Jordan has a large proportion of skilled and highly educated workers (in large part due to one of the most modern education systems in the region). This has allowed a large number of the workforce to seek employment abroad, especially in the Arabian Gulf region and also attract foreign investment to companies seeking a stable country with an educated workforce.

Jordan has a developed industrial sector; it is playing an increasing role in pharmaceuticals and also attracts a growing volume for medical tourism. Science and technology is a fast-growing economic sector, especially IT.

The climate in Jordan is characterised by the hot, dry weather between May and October and the cooler, wetter season between November to April. The climate is similar to that of the Mediterranean and the further inland, the more the climate contrasts.

Expats moving to Jordan, especially to one of the larger cities, will find a cosmopolitan place which is much less of a culture shock than many other Middle Eastern countries. English is widely spoken, which makes communication much easier for a lot of people. However, like many places, learning a few local phrases can be very helpful and rewarding.

While Jordan is quite liberal, women should dress modestly to avoid the possibility of unwanted attention.

Jordanians are friendly people and generally welcoming of new colleagues, however with the increasing unemployment in recent years it is possible, foreigners, in particular, may sense a degree of resentment from some people. It must be said this is unusual, but something you should be aware of. The working week runs from Sunday to Thursday due to the Muslim day of rest (Friday).

Jordanians are hospitable, very sociable and enjoy visiting friends and family. It is common to be invited to drink tea or share a meal. There are a large number of excellent restaurants in major cities.

Getting around can be problematic. Buses are a possibility, provided it is Jett buses. Other buses which are really mini-buses don’t run to any kind of schedule and are not for the faint-hearted. There is no real rail network. Taxies are a possible option, but fares can vary, and the standard and safety of driving are not ideal. Although Uber is technically illegal, it does exist and this may be an option and also the local rival to Uber – Careem. 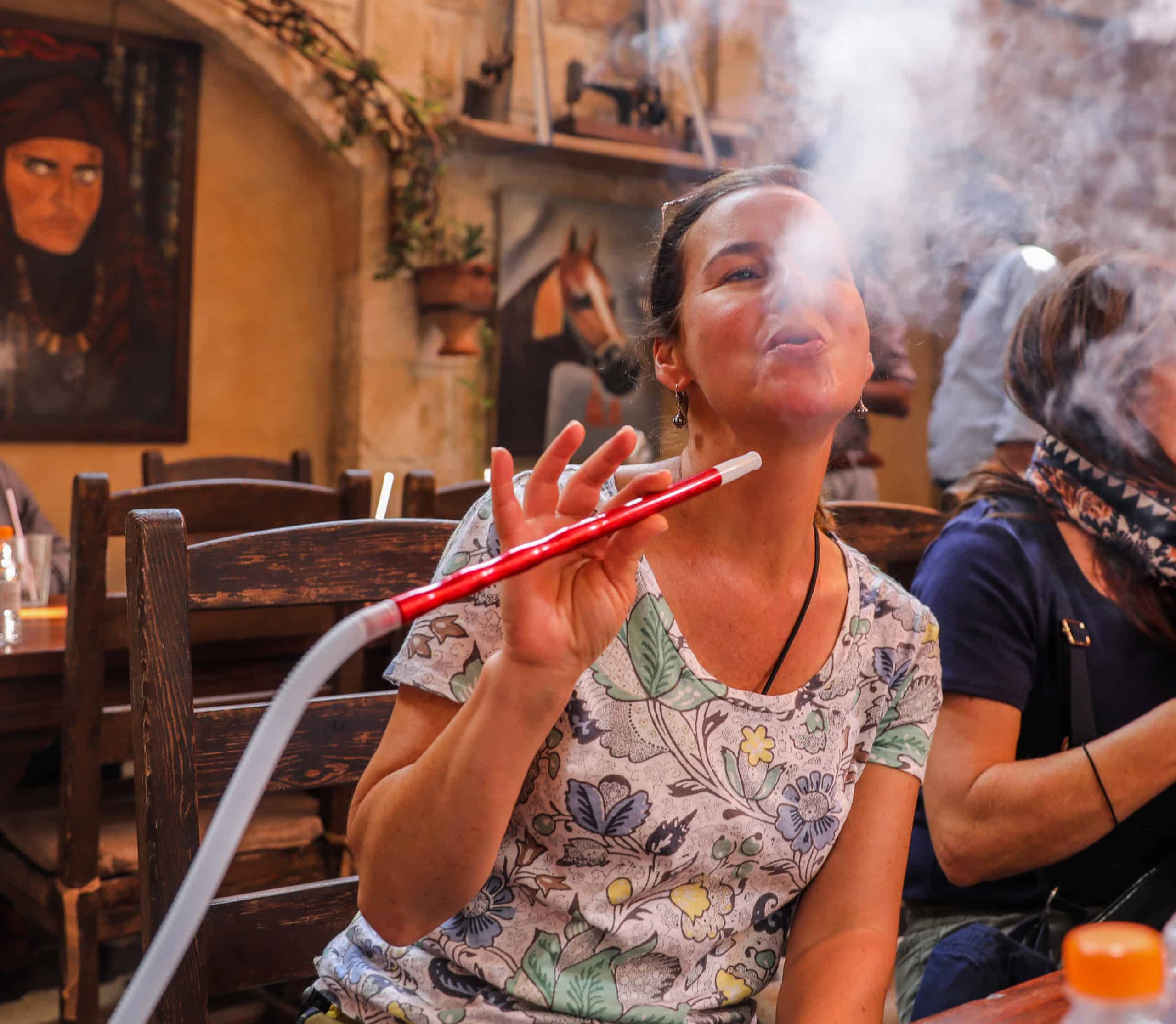 A woman blows smoke form a hookah pipe inside a restaurant in Amman, Jordan

What is the Cost of Living in Jordan?

Generally, healthcare in Jordan is of a high standard, but it can get costly. All major cities and large towns have public and private facilities which are well-staffed and equipped. Waiting lists are generally fairly long at public establishments. It is a good idea to ensure all your health cover is provided privately by your employer.

The health care system is divided between private and public institutions. The private sector provides over one-third of all hospital beds, throughout 56 locations. As far as the public sector is concerned, the Ministry of Health operates more than 1,200 health care centers and 30 hospitals.; The Royal Medical Services operate 12 hospitals and the balance of beds is made up by Jordan University Hospital.

Jordan proudly holds a reputation of being a training center for all types of health professionals within the Middle East and wider region and it provides many regional countries with a sizable number of the healthcare workforce. How about Schooling in Jordan?

Education in Jordan is taken very seriously and the standards are the highest throughout the region. Students undertake 2 years of pre-school followed by 10 years of compulsory education. After that, they take a GCSE exam known as a Tawjihi. Education is provided free by the government.

The syllabus is conducted in Arabic and so unless the child’s family is repatriating, or a native Arabic speaker or the family intends to move long-term to Jordan, a private school may be deemed more suitable.

Private schools, especially international schools are expensive. Whilst there is quite a bit of choice, with several curricula available, such as British, American, French, and IB, these schools are in great demand and tend to have waiting lists. It is likely the school will require the students' previous school records, and may require the student to attend an interview or possibly undertake some form of entrance test/exam.

Some schools in the Amman area

When moving to Jordan from Dubai, importation of Household Goods and Personal Effects

The owner of the goods must be present in Jordan at the time the goods are imported.

Note: This document is provided as a guide for people moving to Jordan from Dubai, UAE and for information purposes only. Customs regulations can and do change at any time, usually without notice. Your mover will provide you with more information.